Rasslin' With Comics: Jim Cornette's Behind The Curtain

I'll admit, I could listen to Jim Cornette tell old wrestling stories all day, and sometimes lately I do just that, but they say reading is fundamental so having a chance to have Cornette tell these stories in another medium is a fun change of pace.  And love him or hate him, you have to admit, no one probably knows more about the history of the wrestling business than James E. 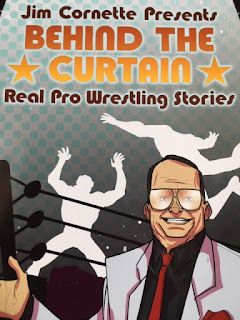 Behind the Curtain is a fascinating graphic novel that well, peels back the curtain on several of pro wrestling's most legendary stories. Some you've probably heard of, like the Montreal Screwjob and the Andy Kaufman/Jerry Lawler feud.  In some cases, like the story of the plane crash that broke Ric Flair's back, Corney includes details you've probably never heard and make the stories so much more interesting than you ever dreamed.

This graphic novel started as a Kickstarter campaign, and it was funded in 24 hours, and has since sold out of it's hardcover and first prints! Hopefully that means there is consideration for a second book.

Brandon Easton wrote the comic based on Cornette's stories, and I bet Brandon probably could write a comic about the Cornette telling him the stories.  The art is by Denis Medri who also did the art on another book I will be reviewing down the road.

Seasoned throughout the book are newspaper clippings, no doubt from Cornette's unbelievable personal collection, adding validity to each story. Also included are some fun touches like "Dream  Supercards", illustrated pinups and a glossary of pro wrestling terms that make this a fun treat for any fan of the history of pro wrestling.

I'd love to go into details on many of the stories in this book, however I feel that would rob you of the "experience" (pun intended).  My only disappointment is that I ordered this off of Amazon when it popped up in my suggestions, and didn't know you could get an autographed copy from Cornette himself off of his website.  Truth is, I may order another copy anyway.

Comic is available on Amazon, Jim Cornette's website (link is above) and possibly still orderable at your local comic shop... You'll have to check on that.
Posted by The Maverick at 11:12 AM 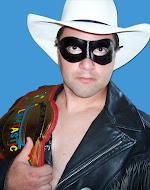